People’s preference for colors varies depending on what they are associated with. Some people are drawn to bright colors while others are drawn to more natural tones. Similarly, decking comes in a variety of different colors that may be aesthetically appealing to some but not so attractive to others.

Different types of decking colors can have more tangible benefits besides being pretty. For instance, light-colored wood decks often get too hot, especially in the sunnier areas of the country. These become more of an issue if you own cats or dogs that enjoy laying out on your deck because you’ll have to move them inside when it gets above 85 degrees Fahrenheit outside. Darker color decks tend to absorb less sunlight which makes them 10% cooler than light colors. If you’re looking for a color that is easier to keep clean, lighter-colored decks may just do the trick. Unlike darker woods, which can hide stains and dirt, lighter decks make it easier to spot messes and spills as they happen. Lighter decking colors also tend to be more reflective than darker ones, making them appear brighter and larger. This is great if your deck itself is not very big as it will give the illusion of more space. 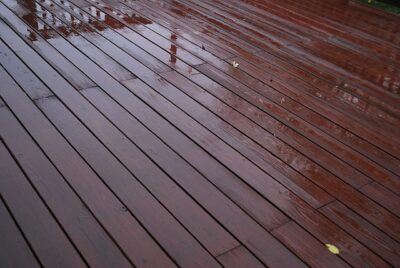 When stained or painted properly, wooden decks can last quite a long time with enough care and maintenance. However, some types of paint can fade over time allowing previous layers of paint to show through creating an inconsistent look this especially happens with light colors. Darker decking colors are more likely to last longer than lighter ones because they absorb the sun’s rays better. This means that they offer a more natural look in a shorter period of time and don’t require as much frequent maintenance. Each color is associated with different woods, which have their own benefits and drawbacks. For example, cedarwood has an appealing scent but has a higher risk of being infested by bugs such as termites. Redwood decking possesses similar characteristics to cedar but does not retain its scent after it is cut so this may be worth considering when choosing what you’d like your deck made from. In general, darker colored decks tend to be less expensive per square foot than light-colored ones though this difference is becoming less noticeable. Darker colored wood decks last longer than lighter ones and are less expensive in the long run since they require less maintenance compared to lighter colors. However, darker decks take more time to build when stained or painted properly.

Overall, when choosing between different types of decking color it is important to consider what you’d like your deck made from, how much sunlight it will be exposed to, how often you’ll need to clean it, and how much you’re willing (and able) to spend. By keeping this information in mind alongside your personal preference for certain colors, you can make a thorough decision on which color would be best suited for your outdoor space. Our team at LV Deck and Fence will be sure to help you determine your deck’s personality